Meet our guide at the airport and directly at the center. Join Pristina, capital of Kosovo, the youngest country in Europe. Explore the political and economic capital of Kosovo to deconstruct an architectural contrast with Europe and this one in constant evolution. Dinner and overnight in Pristina 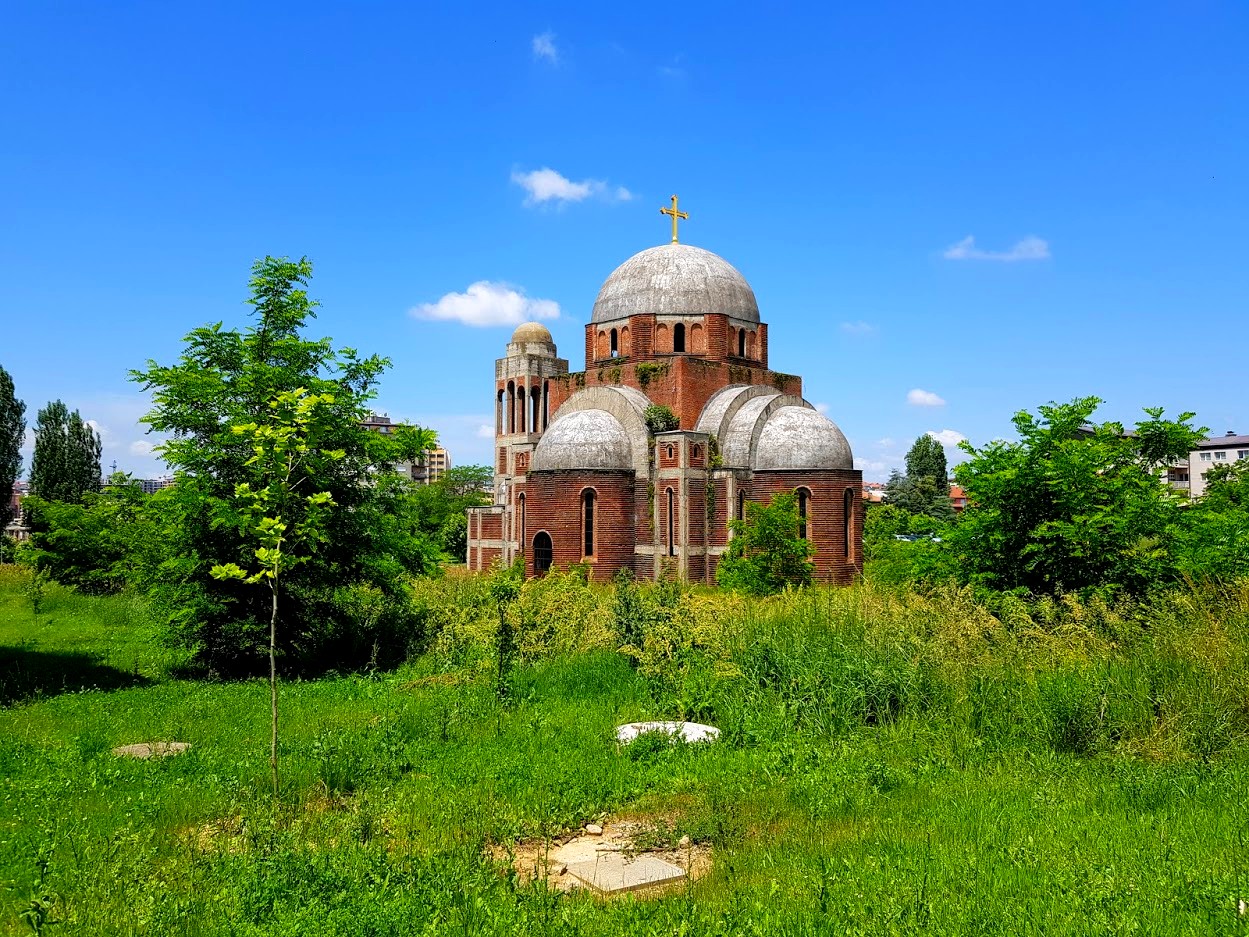 After breakfast, visit the UNESCO Gračanica Monastery. You will drive to the Bear Sanctuary, where many captive bears in private restaurants in Kosovo and Albania were released. After lunch, leave for an industrial and human visit by visiting the Artana mines. (subject to availability) On the way to the castle of Novo Brdo located on the heights of a plateau offering a splendid panoramic view of the region. Start a hike of about 4 hours to Kukaj, a small village rebuilt as originally located in the mountains, a relaxing and exotic place. Enjoy a traditional Albanian meal such as Flija (a tart made of several layers of pancakes covered with cream). Overnight in Kukaj 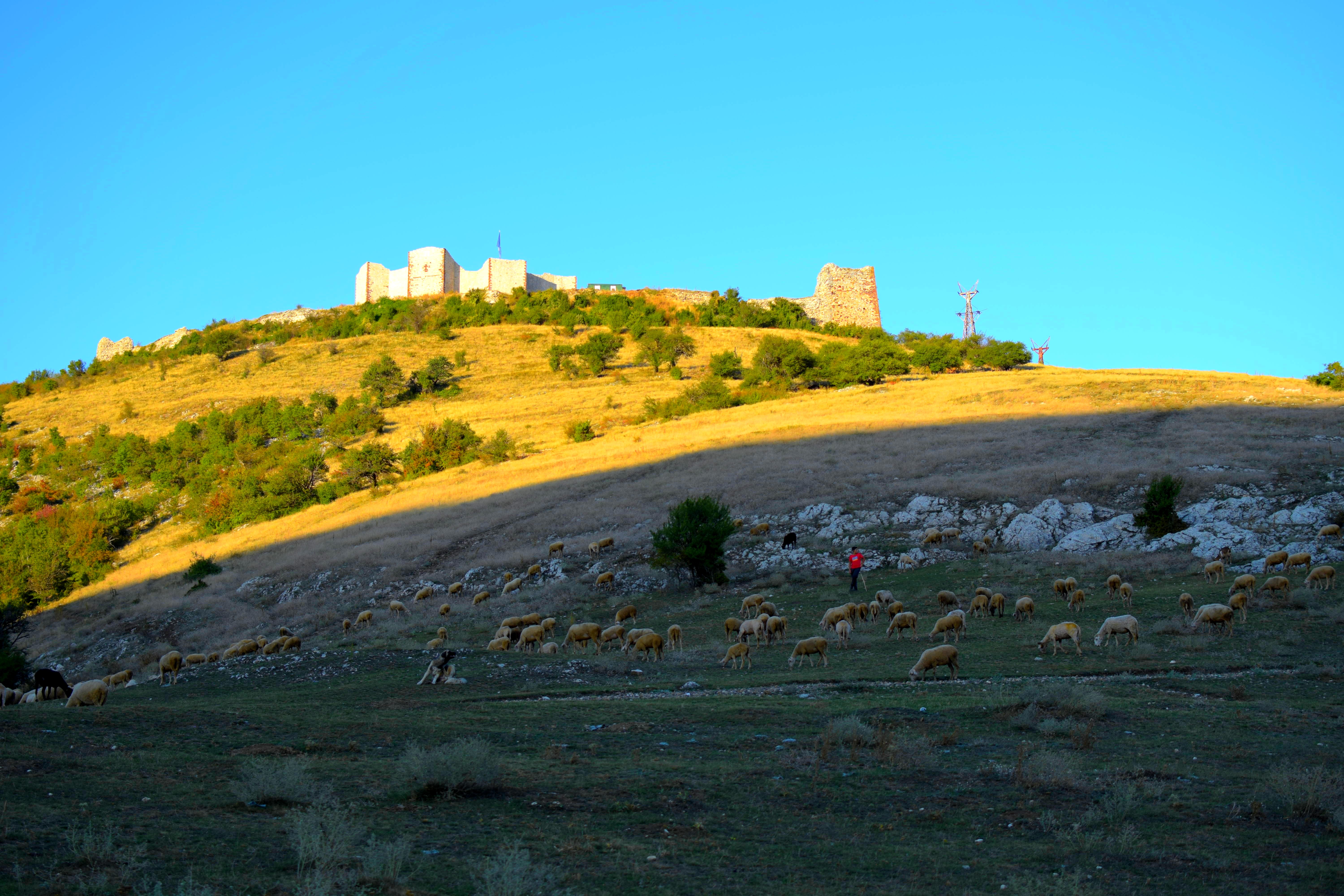 After your breakfast, leave for Janjevo, an abandoned Croatian village. Go on a tour that will trace the history of the Croatian community that settled in Janjevo in the fourteenth century. An important economic center for Croatians who worked alongside the Saxons in the mines of Novo Brdo and Kopaonik. Your route to the Marble Cave or Gadime Cave. Discover an underground world of breathtaking stalagmites, stalagmites and aragonites, which formed over 200 million years ago. The blue, red, white and yellow elements abound along the ceilings, walls and floors of the cave, providing an extraordinary experience. Head towards Prizren through the Sharr Mountains. Possibility of a stop in a village for a cheese tasting Sharr (subject to availability). Visit Prizren, cultural and historical capital of Kosovo. Surrounded by mountainous landscapes, discover the old Ottoman center of the city where the Lumbardhi River flows. Installation in your hotel.  Dinner and overnight in Prizren. 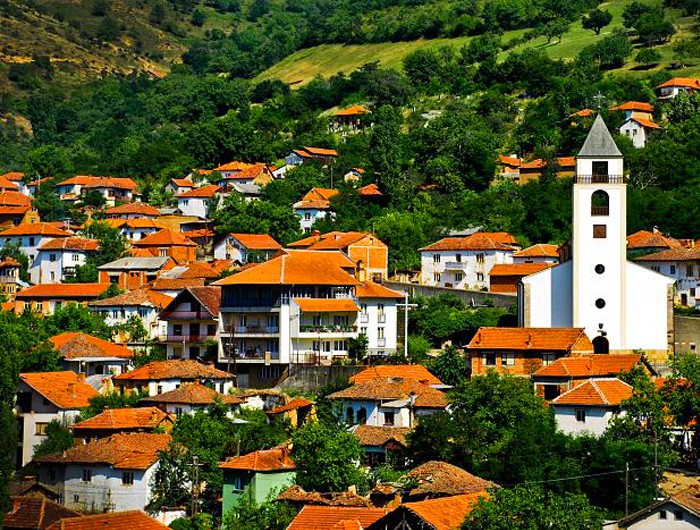 After breakfast, we offer three options during the day. For adventurers, we invite you to paraglide or via ferrata (you can do both activities in the same day). For people not wanting to do these activities, we invite you to relax in Prizren. Paragliding (70 € per person): A baptism takes place safely with an expert monitor to which you will be securely attached. Take off and landing during your paragliding flight will be smooth and, in addition to the sensations, you can enjoy a fantastic panorama of Prizren. Via ferrata (15 € per person): You will start a climbing experience in which you will make a course of a series of steel ropes and stairs while being firmly attached to the rock. Built with the support of Italian experts using state-of-the-art techniques and equipment, the Via Ferrata is as safe as it is memorable. The via ferrata goes up and down in about 2-3 hours. Dinner and overnight in Prizren. 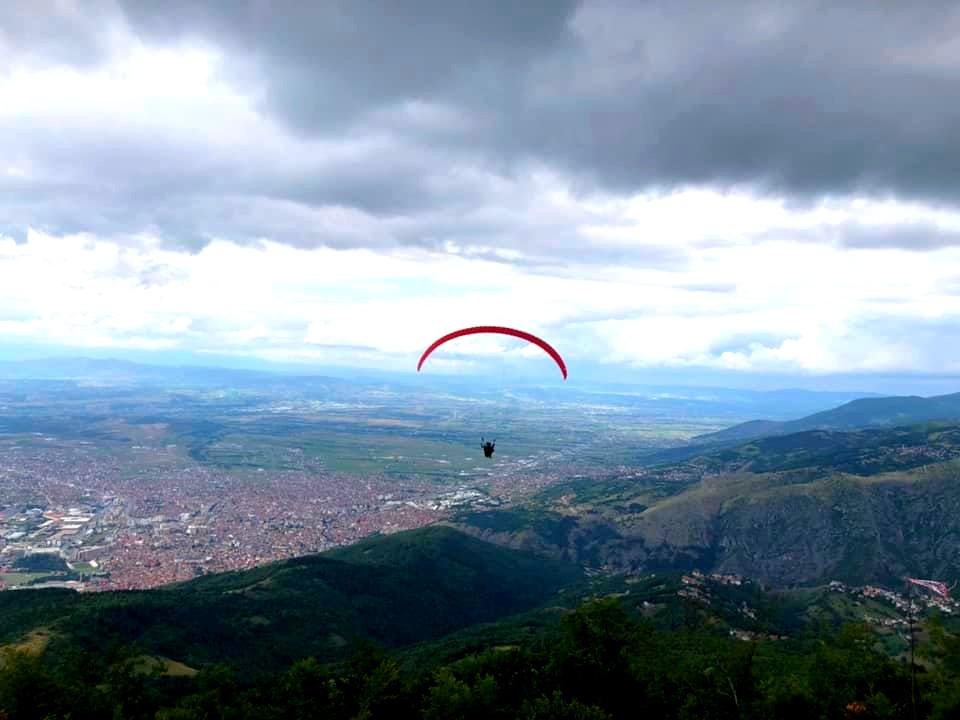 After breakfast, head for Ura e Shenjte to paddle on the Drin Blanc River, one of the last natural rivers in Kosovo. After lunch, stop at Velika Hoca, a picturesque Serbian village, perfect for a wine tasting. Head for the Mirusha Waterfalls and start a two-hour hike to the Mirusha Waterfalls. Then drop your bags at the hotel and enjoy the Spa of your hotel. Dinner and overnight in Peja. 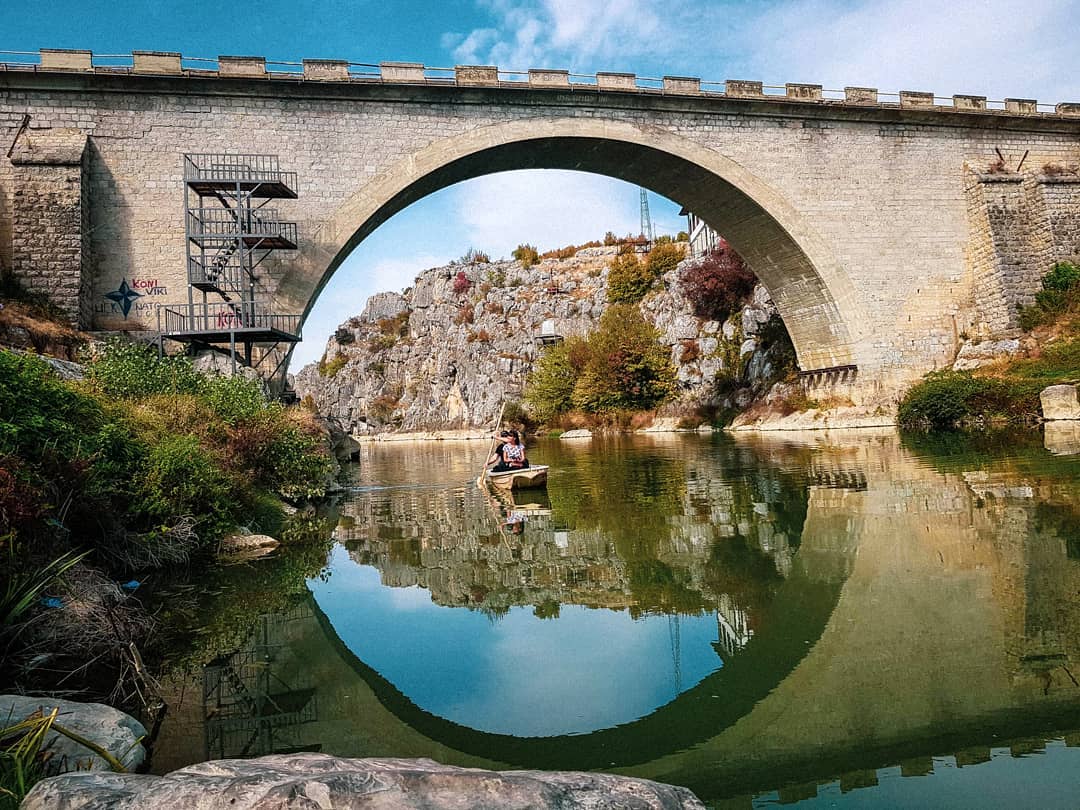 After breakfast, we offer three options during the morning Horseback riding: You will start a horse ride over the Rugova Gorge where you will enjoy the freshness and beauty of the landscape that surrounds you. Tree climbing: Discover the acrobatic park and spend a memorable moment with family or friends Giant Swing: Also known as Swing, the giant swing of Peja Ranch offers you a unique free fall experience. After lunch, join the waterfall of White Drin, walk to the summit where you will reach the caves "Sleeping Beauty" for an interior visit galleries carved for centuries by the force of the water. You will drive to the Rugova Gorge On the way, visit the Patriarchal Monastery of Peja, one of the strongholds of the Orthodox religion in the region. Admire its many well preserved frescoes as well as the calm and serene atmosphere present in this place. Dinner and overnight in the Rugova Gorge 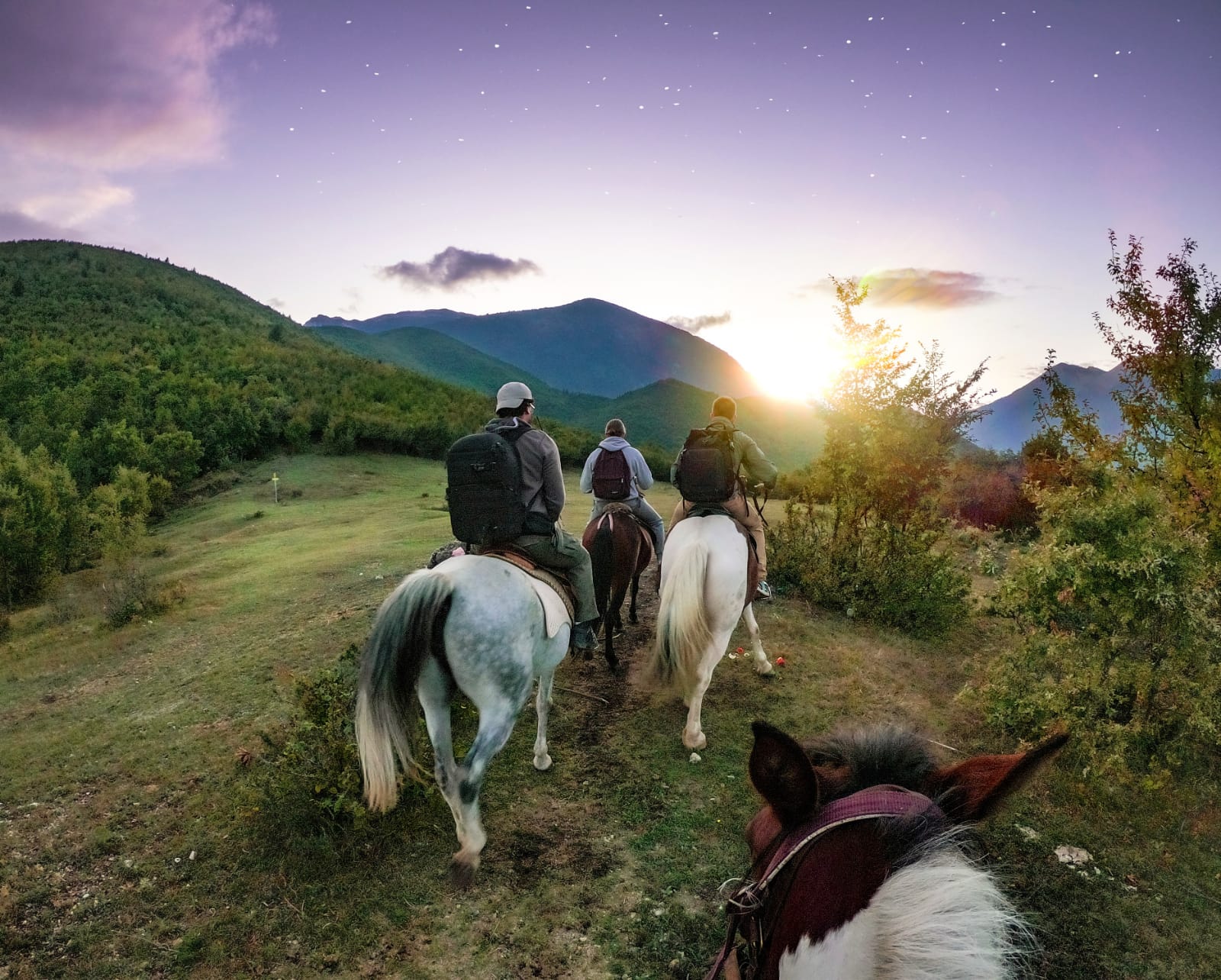 After breakfast, you will drive to Kuqishte where you will start a hike in the Albanian Alps. You will appreciate the beauty of the landscape and you will cross two glacial lakes "Liqeni i Kuqishtës" & "Liqeni i Drelajve" in which, if you are adventurous, you will be able to bathe. Lunch at the lake "Liqeni i Drelajve". You will take the return path in the middle of the afternoon.. Dinner and overnight in the Rugova Gorge.

After breakfast, you will leave for Mitrovica, passing through Lake Gazivode, which stretches for 24 km between Kosovo and Serbia. Located at an altitude of 690m, at the foot of the Mokra Gora massif, it offers beautiful landscapes and nature areas all the more preserved as human settlements are very rare here. After lunch, a stroll in the most divided city of the Balkans! Since 1999, the Ibar River has served as a border between the small, predominantly Serbian, Mitrovica North and the large southern Mitrovica, which is mainly inhabited by Albanians. For its happiness and misfortune, Mitrovica is located right next to the biggest lignite deposit in the Balkans, the mines of Trepča. You will then go to dinner in the most famous restaurant in Kosovo. Lost in the middle of a postcard landscape, you will enjoy a dinner in an organic restaurant where all the products consumed come from the restaurant and local families located nearby. Overnight in Pristina 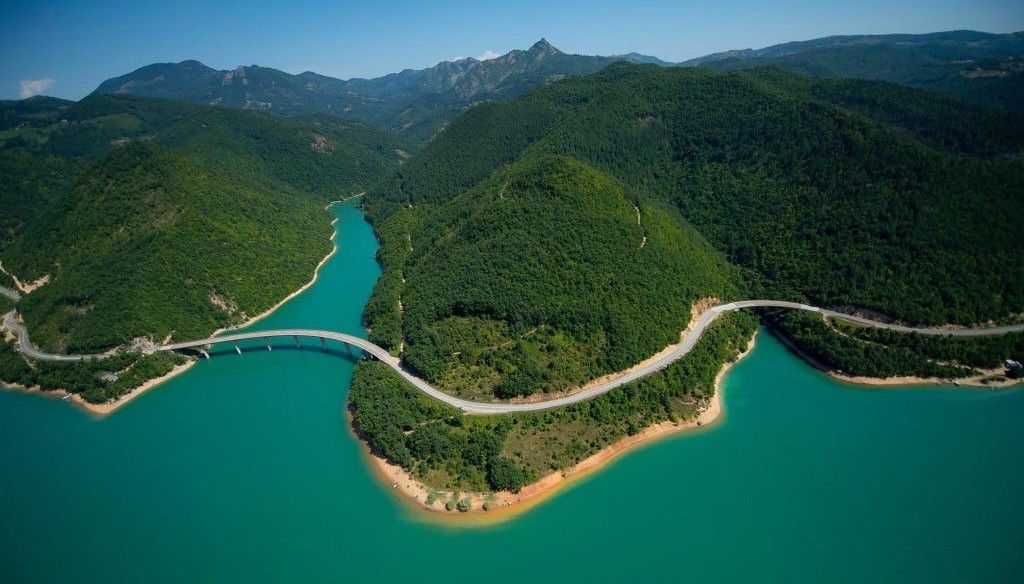 After breakfast, free time in your hotel in Pristina until your transfer to the airport for your return flight.

Located in the heart of the Balkan Peninsula, this landlocked country is one of the hidden jewels of the region. Visitors, however, have a lot to discover. Indeed, its rolling hills, lush forests, charming old towns and many local traditions represent the beauty of Kosovo.

Airport - city - airport transfers - The French tour guide - Overnight stays in Guest Houses and 3 *, 4 * & 5 * hotels (local standards subject to availability) - All transports mentioned in the program with driver - Full board breakfast from day 1 to breakfast of day 9 - The entries in the monuments - All activities mentioned in the program »Discovery of the caves of Peja and Gadime - Cheese tasting in the Sharr Mountains - Kayak on the Drin Blanc River - Traditional lunch in Kukaj Hiking in Kuqishte, Novo Berdo and Mirusha - Guided tours of Prizren and Pristina - The visit of Artana Mines